Traxxas has grown to become the number-1 selling name in RTR nitro and electric models for the last 4 years running. No one has done more than Traxxas to advance the RTR category with innovative thinking and fun designs that make it easy for anyone to get started in the great R/C hobby.

Traxxas was started in 1986 with an idea for what was at that time an entirely new concept for a fully assembled, hobby-class R/C car. This new car would have all the same benefits of a hobby-class kit such as replaceable parts, hop-ups, and a high-quality component radio system, however it would be fully assembled with a colorful body, right out of the box. Traxxas coined the term "Ready-To-Run" (RTR) to describe this new class. Since a fully assembled, ready-to-run car would appeal to the entry-level beginner, a toll-free customer support line was set up from day one to service an entirely new category of hobby consumer. At first, acceptance of the RTR concept was slow because traditional R/C kits had always been unassembled. Once people realized that a Traxxas RTR had the same performance and quality as the traditional R/C kits, only that they didn't have to build it, the ready-to-run Cat was a runaway hit! A kit version would still be offered for those who still wanted to have the building experience.

Over the next few years, Traxxas' electric RTR models continued to grow in features and performance. Models such as the Hawk and Radicator incorporated the handling, driveline and suspension geometry developed by a highly successful racing program. Traxxas won many national and regional off-road championships and then offered kit versions of those winning cars as models such as the TRX-1 buggy, Blue Eagle racing truck, TCP buggy, and the SRT racing truck. TCPs and SRTs can still be found today racing competitively at local and regional levels.

Traxxas' interest in R/C didn't just stop on land. In 1989 Traxxas applied the RTR concept to the world of R/C boating and developed the Villain IV deep-V offshore cruiser. There had never been anything like it with its scale appearance, twin motors, dual outdrives, and electronic speed control. Gone were the days of using messy, toxic glue to try and assemble your own boat hull. The Villain IV was ready-to-go, right out of the box.

After a string of highly successful RTR electric models, Traxxas took the next step to develop the first RTR gas truck. When the legendary Nitro Hawk was released in 1992 it was an instant success and opened the door for a whole new wave of R/C nitro consumers. Traxxas unraveled the complexities of nitro engines and made the awesome speed and power accessible to all hobby consumers, including a new breed of "entry-level" nitro consumers.

In 1996, Traxxas made the first Ready-To-Run nitro boat, the Nitro Vee. It features water-cooling and the innovative (and patented) Return-To-Shore feature which uses an auxiliary electric motor to drive the Nitro Vee back to the shore if the Nitro Engine runs out of fuel. It was also the first nitro boat to feature a clutch, which allows it to idle and drive at low speeds with the precision of an electric boat.

Then, in 1999, T-Maxx arrived. With T-Maxx, Traxxas unleashed an all-out technological assault on the R/C world. It embodies the creative and energized spirit of a company that loves its craft and the products it creates. It's the first nitro with a true forward/reverse transmission actuated by the driver with the 3-channel TQ3 radio system. The transmission is fully enclosed which allows the use of an automatic two-speed mechanism which functions in both forward and reverse, and allows top speeds of 30+mph. When it came to size and suspension, all the conventional standards were thrown out the window in favor of fun and unmatched performance. The incredible suspension has over 3.5 inches of travel and 8 oil-filled shocks. 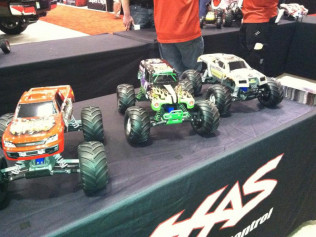 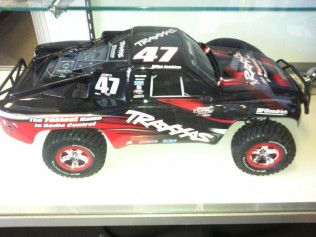 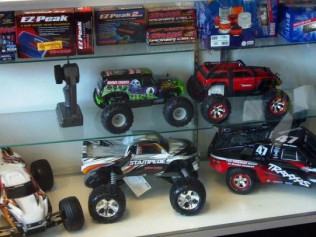 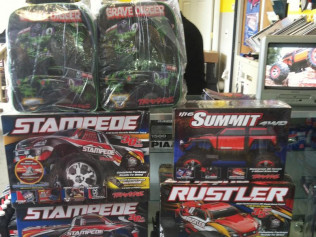 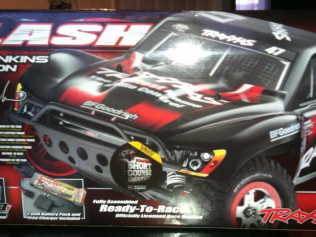 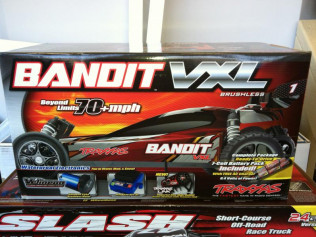